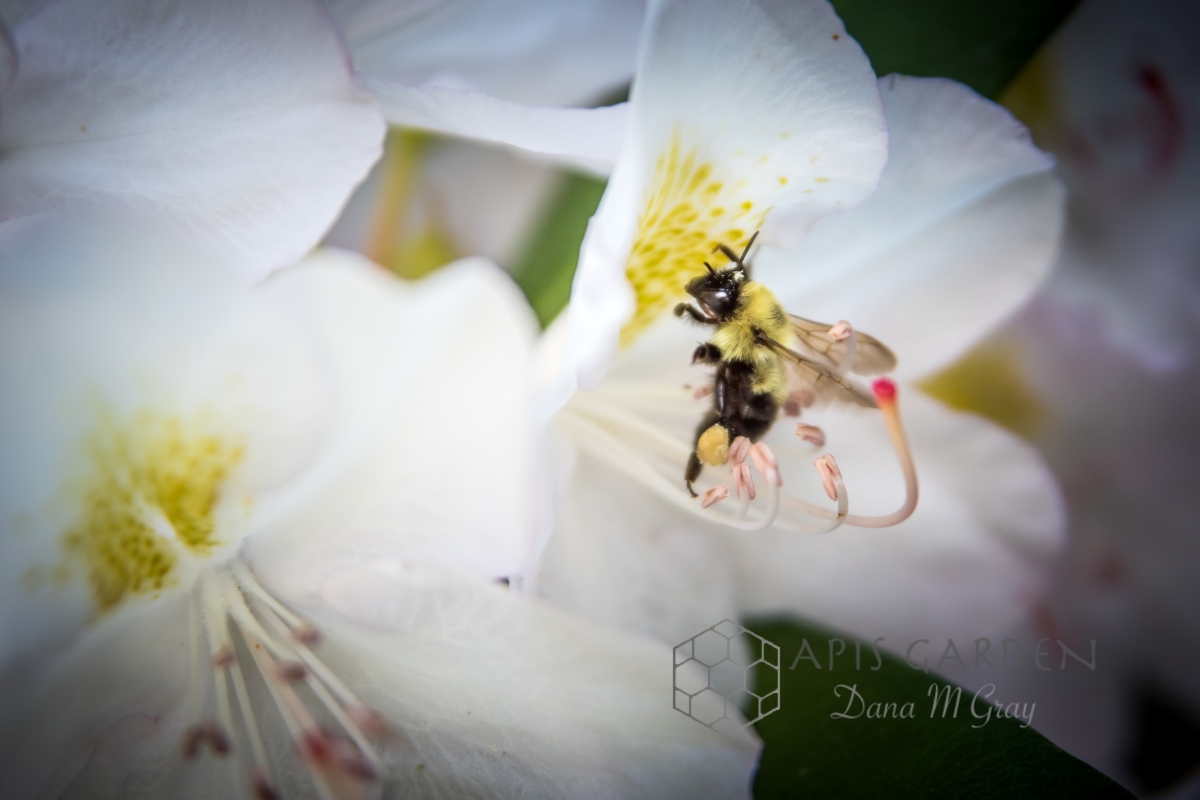 The more I look at the Rhododendrons in pink, red and purple…that more I’m amazed at the design of these beautiful blooms.  The anthers are perfectly placed for this traveler to carry some precious pollen to the next flower.  Nature is amazing! 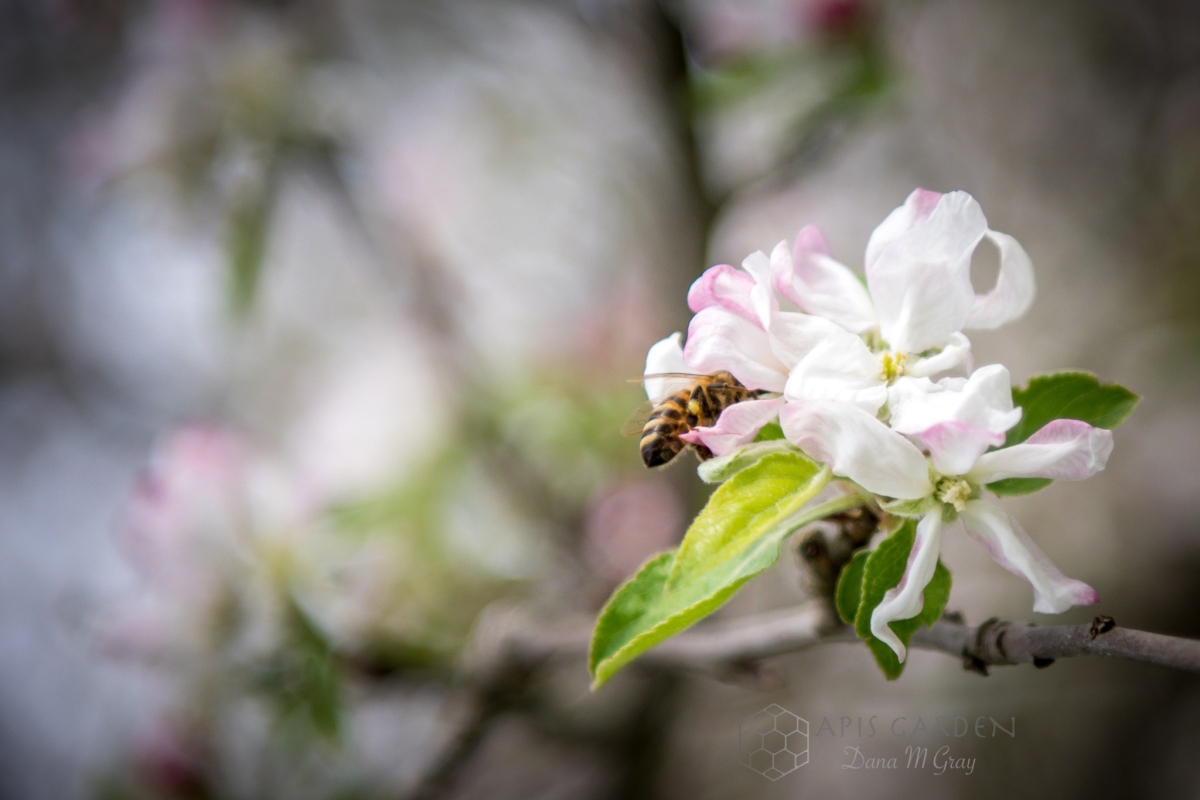 Honeybees and Apple Blossoms are a sure sign of spring! I look forward to this time of year all winter long!

I love that I was able to grab this shot.  It was a dreary day out, and I was sure I wouldn’t be able to see any bee’s.  I was wrong, and this beautiful girl had found plenty of pollen too, which is hard to find after it rains.

It’s interesting to me that I can order two packages from the same apiary and end up receiving two different types of colonies.   One hive is so busy that they are flying into me when I’m at the hive, and the other is so small that it hardly notices when I am around.  It seems like there are 2/3 fewer bees in the second hive then the first.  I was worried that perhaps the package tried to abscond and the queen would be gone, but I have eggs and larva so even though I didn’t see the queen, I know she’s there.  I’m confident there’s plenty of time to build the hive.

I wonder if some of the bees from Hive #2 moved to Hive #1 in the bustle of hiving.  There were bees everywhere, and since they traveled so closely together, maybe they mixed up the pheromones.  The difference in size of the two hives is amazing.

Next inspection I will add Rhubarb leaves, and at least for Hive #1 I will do a sugar shake and see what the might load looks like.  Not sure I want to add extra stress to Hive #2 so, for now, I will treat both based on the one.

On a side note, my mother and brother have gained a hive of bees.   They had an empty Langstroth hive sitting out with foundation, and now there is a large colony living there!  How cool is that!

This is such an exciting time of year!

As the early spring blooms are coming to an end, the excitement of the start of a new bee season for me is about to begin.  It was a difficult year in my little apiary last year, and I’m eager to start again with hopes and prayers for a successful year.  This year I have ordered two packages of #3 Gold Star Honeybees.  These guys are used to small cell comb and are a mix of  Russian, Italian, and Carniolan genetics also winter hardy, which I’m hoping is better than getting packages from Floria.  I’m hoping that these girls will be able to withstand the temperatures of WV winters with less overall stress.

This year I’m also going to try an additional varroa mite treatment that I read about in The Beekeepers Quarterly (No. 127) on how a couple of beekeepers, Ann and Maciej Winiarski, in Poland, have been using rhubarb (Rheum rhabarbarum) as an effective method of controlling varroa. Rhubarb leaves have a natural low dose of oxalic acid which can be used at any time in the apiary to control varroa without harming the bees or honey. By placing the leaves, together with their crushed stalks between the brood box and super, the worker bees will work to remove the rhubarb. Because of the conditions inside the hive, the leaves don’t dry out but slowly releases oxalic acid in a gaseous form which circulates around the hive.

this method wasn’t originally done in a top bar hive, but I don’t see why this wouldn’t work perfectly in my hives.  I have a beautiful patch of Rhubarb transplanted years ago from my in-laws.  I usually just compost the leaves…but I’m super excited to be able to use them for the good of the girls.  I’m keeping my fingers crossed for a healthier and stronger hive going into winter this year. 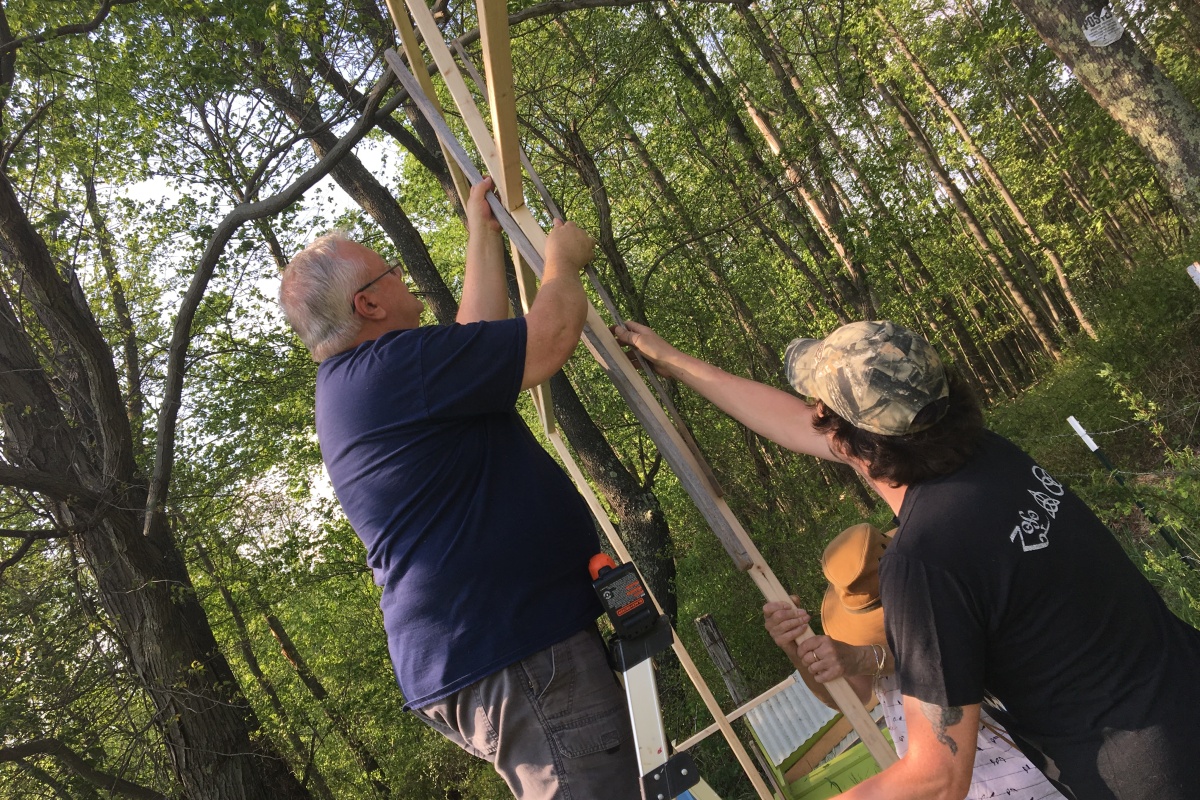 A few weeks ago I treated my hive with HopGuard II for mites.  I haven’t used this before, and it seemed like a good choice for a topbar.  I was also happy that I didn’t need to worry about honey in the hive when being used.  I’m hoping that it works well for this season.

But then I had a thought…what if I planted hops to grow around my hive?  Would that have a positive effect in keeping the mites in check?  I haven’t seen anything out there about such a thing, but I couldn’t convince myself that it would hurt, so I bought some.

I ended up ordering ten rhizomes of Liberty Hops.  For my friends that are beer makers, Liberty is a triploid variety bred that is crossed between a female Hallertau Mittelfrüh and a downy mildew resistant German male hop. The variety was developed in 1983 from the USDA program at Oregon State University and released in the US in 1991. Of the four triploid Hallertau Mittelfrueh varieties released, Liberty most closely resembles the Hallertau Mittelfrüh.

We built a frame around two of my hives and planted them so that they will grow up the frame on cordage.  I’m hoping that in the winter, I’ll be able to cut the binds off the rhizomes and leave them on the frame to act as a windbreak for the winter.  Of course, we will have harvested the hops before that.

Hops and Honey…oh what is one to do with that combination?! I’m keeping fingers crossed for a decent first-year harvest so my son can help me make a batch of Honey Wheat Ale for the cold winters months!

Keep your fingers crossed for us! 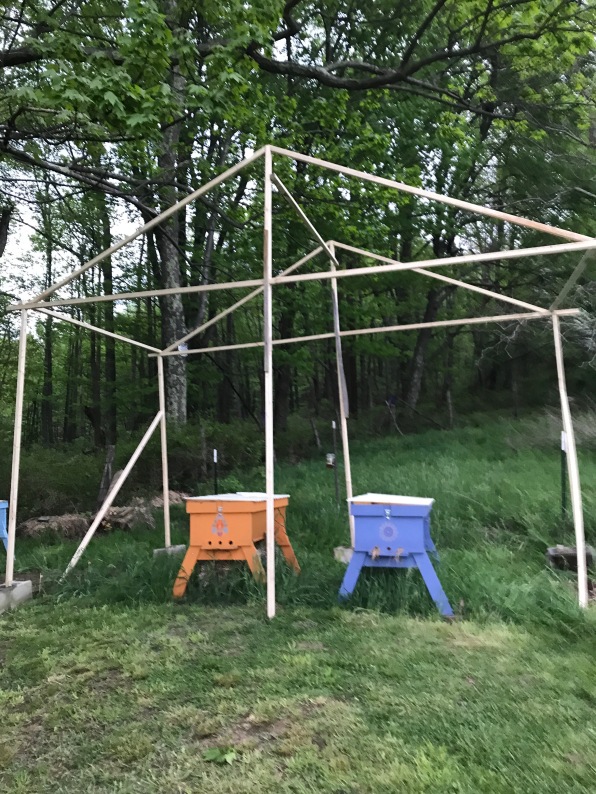 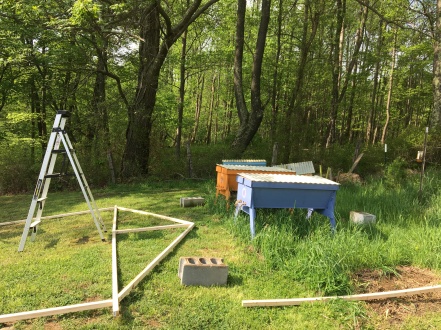 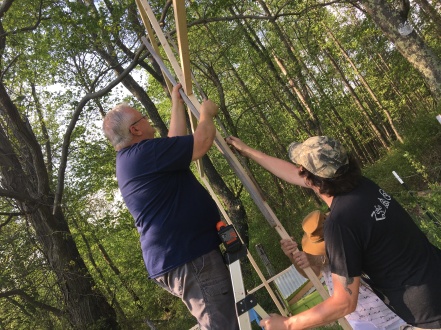 Spring is such an exciting time for those of us in the beekeeping world.  Last week another swarm was added to the apiary.  I wasn’t prepared for how large this was, so instead of placing it on a small nuc box until the 4 topper hive was ready for occupants, I tried something new.  Using 2 follower boards and a wall of straw between the two…I added this swarm to the back of the previous hive that was captured earlier in the spring.  A 1/2 in. circular hole was added to the side of the hive for a second entrance.  I was nervous that it might not be far enough from the front of the hive and a bee war would insue.  Happily, this plan worked!  A week later I was able to easily move the new swarm into their permanent home.  These ladies are most likely Carniolan bees, and there are kicking butt!  This hive is very busy and making comb and bringing in nectar and pollen.

There official name within the apiary is the Maple hive…and they are doing great in their new home. 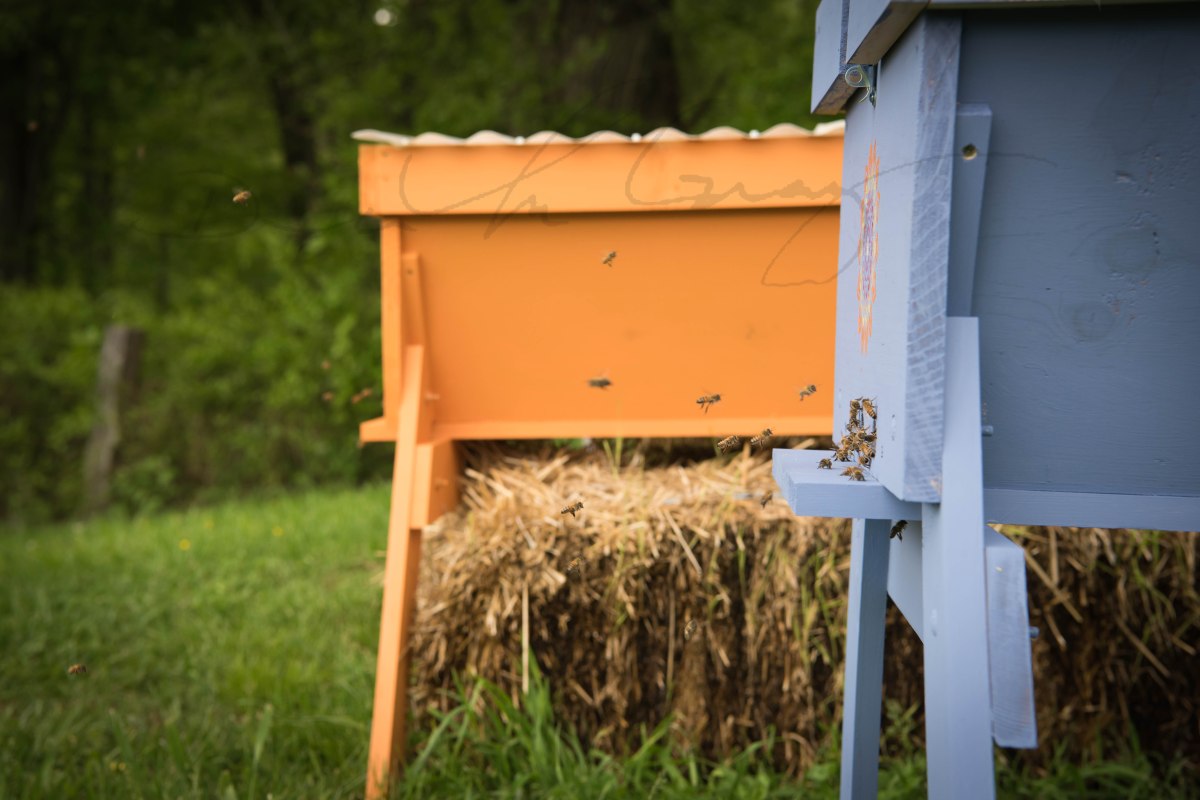 Spring is such an exciting time for beekeepers.  It’s the time for healthy bee colonies to swarm, and I’ve been ready since the beginning of April.  Eagerly I’ve had all my tools, hat, veil, gloves and a 5 bar nuc hive in the back of my Jeep just hoping I would get the called.  In January,  I officially added my name to the West Virginia swarm list with the state apiarist, and I’ve had my fingers crossed ever since.  Little did I know that it wouldn’t be the Apiarist that would call me.  I woke up this morning with a voicemail from a co-worker asking if I might be interested in a swarm.

I tried really hard not to get too excited because bee’s don’t always stick around for very long.  I was pretty excited when they were right where I was told they would be. 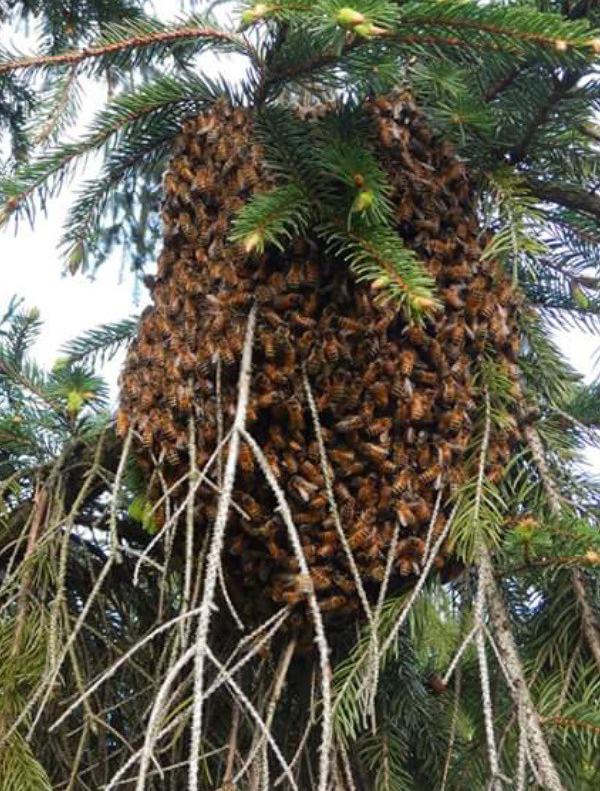 I shook them right into my nuc and added 3 bars of drawer comb.  It didn’t take these girls long to decide they liked the arrangement. (you can tell by the way they put their bottoms up in the air to fan a “we found a home” pheromones through the air)  I just love the sound a happy hive makes.  I shook down the remaining bees a few more times before I closed up the nuc and tighten the ratchet strap down to head to our apiary.

As I was talking to the homeowner, I  was thrilled to learn that right there in the front yard was a bee tree.  A beautiful healthy bee tree…and it’s been there for a number of years.  The entrance to the hive was 15 feet off the ground, and it was just buzzing with life.  I’m so intrigued with feral hives and would love to do a photo project of found feral hives.  I think it would be a great exhibit for the local art center.  With that in mind, and seeing that there was a ladder propped up on the porch in front of the tree, so I jokingly suggested I should come back with my camera.  He agreed.

I’m not sure he knew I was serious, but I’m hoping to take him up on the opportunity soon 🙂